Scrubette is the newest addition to our robot family! She’s a Scooba 380, and… There’s actually quite a story behind how I got a Scooba. Not how I bought it, but what has been leading up to this moment…

It started back a while ago, I think it was like, January of 2017, and I asked my Aunt for a Scooba as a birthday present. I sent her the link to an eBay listing I found of one, and a few days later, it was sold. Except, even though I thought my aunt got it, it turns out some other person got it right before her! So instead, I got a lithium battery for my Roomba. 😒

But fast forward a few weeks ago, and little old me is playing Sims 2. I had my sim build a CleanBot, and then… that was enough to re-ignite the fuel that kept my love for Roombas and robots going. I started with running my Roomba basically every day, then I got a battery for one of my other Roombas, Greeny. But not too long afterward, I re-started my quest to buy a Scooba. I looked around a little more, but all I could find were listings for parts only and were $30+ for shipping… But then, I stumbled across a listing that was approx. $88.54, and my impulse-buying-brain said “BUY IT BUY IT BUY IT!!!” and I listened to it. But as it turned out, I didn’t have enough money for it. 😕

Except… DUN DUN DUNN!!! Plot twist! I had recently had a birthday party, and as it turned out, I got over $100 in cash! I was finally able to make my dream come true. As soon as I could, I looked for some more listings for the other parts. It didn’t come with a charger or a virtual wall (and some other parts but we’ll get into that later) so I had to buy those separately.

The Scooba was scheduled to come on today, the 28th, but USPS had other plans. They surprised me by delivering it 4 days earlier! Actually, I already knew that thanks to the package tracking info. The Scooba and all of its other parts came on Monday the 24th. But, of course, it was far too good to be true… The Scooba was missing TWO crucial parts… Those were the Filter screen, (because it also does a light vacuum of the floors) and the battery. so, I looked for those too. and found some good listings. The filter came on Wednesday the 27th, and the battery just got here today, the 28th. I charged it up and filled the tank with water. I turned it on to start, but it greeted me with an “Uh-oh!” beep and “Check Tank” lighting up. I at first thought I needed to prime the pump for water, but after using a turkey baster that wouldn’t fit, it became clear that the pump wasn’t the problem.

Next, I tried to tighten the screws that were on the wheels. That didn’t help either. The only thing left to do was to try dumping some of the water out of the tank. And low and behold it worked! Perfectly! It ran for about half an hour because there wasn’t that much water in it, but the dirty water tank had some pretty dirty stuff in it. nearly 3 years later, and Scrubette is finally here. A few things that I noticed were that the front caster wheel kept getting stuck in the abnormally wide grout that’s in our kitchen tiles. She also got a little tangled up in the vent covers for some reason. Anyways, it cleans way better than our Braava Jet 240 does. Although, Scoobas have a tendency to break randomly… Let’s hope that this one holds on for a while! If you have any questions, requests, or anything else, please let me know in the comments! 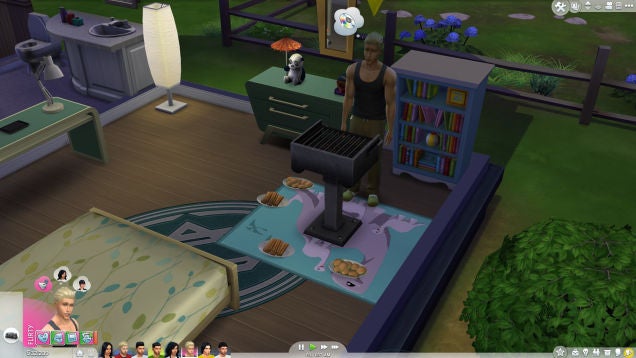